The last couple of days have been ones of
tears and joy
Wednesday morning I had only been at work about an hour
when I got a call from my Aunt that is here on vacation
and staying at our place
she wanted directions to the hospital
never a good thing when you are on vaca
so I say ~ who got hurt
thinking that some one tripped or
cut themselves slicing a bagel
her response was not what I expected at all
"Bobby had a heart attack last night"
Bobby ~ is my Uncle
Dad's brother
just turned 64 in May
and since Dad's passing ~ we have become closer
a lot closer than we used to be
I will back track a bit now
to the tough guy ~ the one that hates hospitals
the one that spent a lot of week-ends in the woods with Dad
cutting wood for the winter or hunting
they were buddies
so when Dad had his stroke
Uncle Bobby was at the hospital
every single day...
he lost his best friend the same day I lost my father
so after the funeral he was in the corner
taking some time and talking with my best friend
what she said to me after their talk
brought fresh tears to my eyes
he said
I know that I could never replace Dave
but I would be honored to walk in his shoes that day
and walk Lori down the aisle
I took him up on that offer
and we have been closer ever since 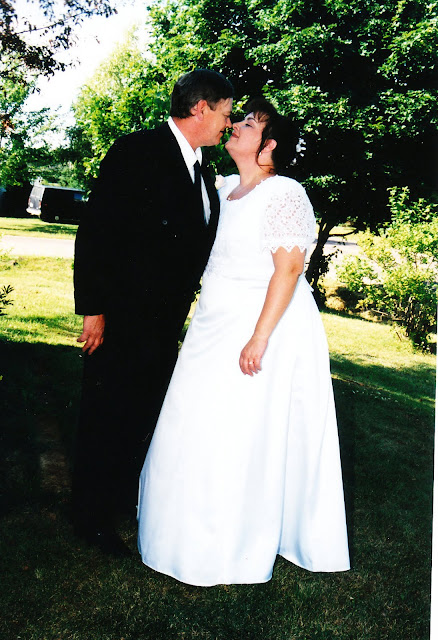 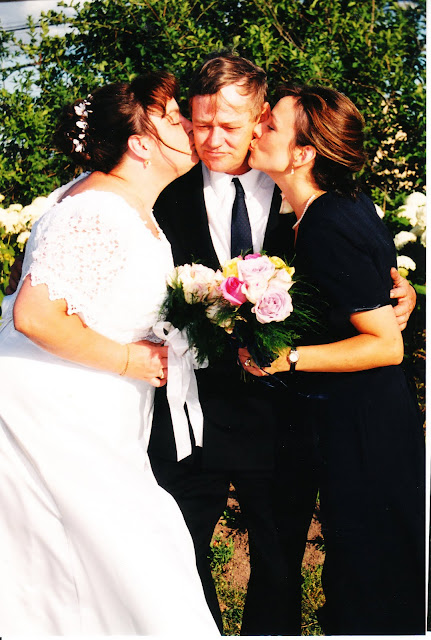 Gina & I with Uncle Bobby on my wedding day
So we are awaiting word today to see if he will be transferred back to
the hospital here or sent home
I am breathing a sigh of relief
and thanking God for answering my prayers.

Phew indeed, so glad that he is doing well Lori, what a fright you had though....will be thinking of you all....

Lovely photos of you :) xx

Such good news about your sweet uncle. And . . . loved seeing you on your wedding day.

Oh Sweetie, I wish that I could do something for you. I will be saying a prayer for your Uncle Bobby to keep on improving. My heart goes out to you my friend. Love the pics of you on your wedding day. So nice that he wanted to be a part of your special day and that you welcomed him. You truly are a special person. BTW, you look stunning!

Lori~ I'm so glad to hear that her is doing okay now and in good hands! I pray for a full recovery for him. What a great man to be so close to you!

Oh Lori,
Poor Uncle Bobby. I am sure that the hospital will get him back on his feet and back to his old self again. It must have been an awful shock for you and a reminder of the sad time when your dad was ill. I will be sending healing vibes over to dear Uncle Bobby and wish him a speedy recovery. Much love.
ps: gorgeous images of your wedding day. XXXX

Definitely NOT a phone call you ever want to receive. Good to hear he's on the mend. You're blessed to have each other!

What precious photos of you and Uncle Bobby and I am so happy to hear that he is doing well! Keeping him in my thoughts and prayers for a quick recovery! Happy weekend, sweet Lori! xxoo :)